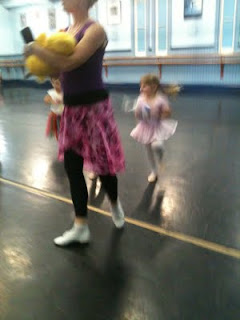 I saw a preview for a movie with a radical plot last week. It was a fictional movie, about a Dad who says' Yes' to his children and the movie demonstrates all the joys and adventures that saying 'yes 'to kiddies and their whims and fancies can bring. So, even though this idea goes against every fibre of being that is my parenting instinct, I was inspired. I thought, "Hey, I'll give it a go".

So I said 'yes' to another biscuit, 'yes' to climbing into the car through the boot, 'yes' to everyone's song selections in the car and so on. The result was, for a little while everyone felt like they were getting what they wanted. It was a good idea, right up until the questions got to 'Can I stay home from school?' and 'Can we buy a guinea pig?".

On Mondays, I take Sophie to her ballet class. It would be better described as her bliss class. The little princess get's herself ' all pinked' and frocked and skips happily with pig tails flying into the hall to adore her ballet teacher and frolic in her bliss. This Monday, Sophie asked a very simple question, "Mummy, I want you to watch me. For the WHOLE class." So I said "Yes". And for one whole half hour I gave my daughter my full attention through a little window into the ballet hall. I didn't play Words with Friends, or check the nothing that people have to say on Facebook, or text the luthier or anything. One whole half hour of undivided watching.

About 5 minutes into the class I caught myself with the widest, most unselfconscious grin I have had in years. There they were, a group of little girls all dressed up in tutus and fairy costumes, and full ballet rig (though they are only three) soaking up the presence of their teacher, the dream ballerina, chins held aloft skipping, pointing and flexing and being a mermaid. The happiness and spirit was palpable and it had infected my face. I couldn't stop smiling.

After about 10 minutes I became aware of 3 mothers behind me. They were watching too, as their daughters took their turns at sideways skipping with scarves held before them in front of a mirror. And their commentary began,
' Oh, look at Lila, she doesn't concentrate.'
'Well look at Ruby, she is totally uncoordinated."
'What about Lucy, she isn't even going in the right direction."

The criticism was delivered with giggles and in the spirit of humurous self- deprecation, I guess.

And then they moved on to a systematic dissection of themselves. In the few minutes they stood there, while there daughters danced joyfully, they compared each other's faults. They weren't losing weight fast enough, they drank too much, they were overwhelmed with busy-ness and, of course, they were shit parents. All in a casual, couple-of-minute conversation.

And before us, in that room through the window frolicked the girls, blissfully dancing, blissfully in love, blissfully unaware of the social conventions ahead of them.

I turned the grown up voices off after that, tuned into the girls and said "Yes".
The grin returned in an instant.

The most beautiful ,poignant, glorious thunderstriking piece of writing I have ever read of yours G .... brought the wetness to my eyes ... here's to YES ... was that the same ref in regards to resetting children's psych-love-security levels, for want of a more articulate way of saying that? xxxx gilla

Oh, gorgeous, yes. Also, I love how little girls are allowed to be dressed up in ballet classes these days. When I did ballet at school so many years ago, it was strictly tights and leotards and slippers with elastic - not even ribbons. You had to graduate to those later... if you were good enough. Er sorry, I think I'm still bitter, ha!

Beautiful post. I remember my little girls - now wonderful, unconventional young women - being small enough to pink up and play at being proper ballet dancers for an hour a week ... the confidence and the grace they came away with is with them still.

It's so easy to get caught up in the constant whirl-wind of life, thank you for reminding us to take a moment and enjoy the 'here and now'. ♥

i love you, yes i do

Oh to be a tutu clad small. x

I just came over from Myrtle and Eunice, what a lovely peice. My crime rather than saying no is saying "just let me finish this" so always making her wait. Hard to do but yes is good.

I think I'm going to have to have a Yes Day. Let me finish this day's stuff - I'll do it tomorrow!

I loved every single word , thought and intent of this post , yes I did . Thanks !

Beautiful post, so glad I jumped over from Myrtle & Eunice to read it

I, too, joined this blog post from
Myrtle & Eunice and am so glad I did. Fabulously written post - I think this blog is going to have to bd added to my blog reader!! Thank you for reminding me of something so important.

It's a great parenting strategy - seriously! I myself have often joked with a friend that we should write a book called 'Mothering for Mugs - how to give in to your child's every whim because it makes for an easier life'.... well that overstates it a bit, but as I often tell my Other Half when he's accusing me of giving in to our children and appeasing them, HE'S NOT THE PRIMARY CARER!!!!! When you're with them 24/7 or it feels that way, you can't be taking a stand on every little thing.
He bought them guinea pigs yesterday so I think it's sinking in.

hello there mrs. smith. mrs. cohen here, from colorado. i just smiled out loud here in the tea shop drinking early grey and reading this. yes. i want to say yes more, just like that. and turn off those damn grown up voices, just like that. what a gorgeous light you just shone upon those dancers and yourself, and then every reader who reads here. love. thanks.

I needed your reminder to say yes. The blogosphere is great, I love coming across people who are like minded with parenting - it helps one feel less alone! xx

I 've just popped over from M & E too, lovely post! It reminded me of a joke in our house where the kids call me Mrs Yes and my husband Mr No, as you can imagine they don't ask too much of him!!! I am always reminding him to think twice before just barking out "no"! Not that I say yes to everything, but they can usually get a maybe to most stuff! I think I'm a bit of a push over! Havre agreat day! julie :)

Mrs Smith
Tales from a small southern island. Mother of 3 and wife to a luthier. This is the fuffenscheit of Smith family life.